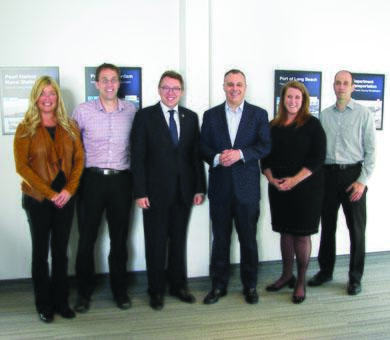 Visit from the Minister of Maritime Affairs, Mr. Jean D’Amour at SIMCO

Quebec, October 4th, 2016 – SIMCO is pleased to have greeted the Minister responsible for the Quebec Maritime Strategy, Mr. Jean D’Amour, at SIMCO’s head office located in the Quebec Metro High-Technology Park. Being an engineering firm that has specialized in the durability of concrete infrastructure for over 25 years, SIMCO has developed a unique offer to meet the specific objectives identified for the preservation of Quebec’s maritime infrastructure. SIMCO is therefore considered to be a key partner in the successful implementation of the Quebec Maritime Strategy.

More than a year ago, Prime Minister Philippe Couillard and the Minister of Maritime Affairs, Mr. Jean D’Amour, launched the first maritime strategy in the history of Quebec. Over $1,056 billion has been invested thus far, including $206 million from the Quebec government.

“We have established a government strategy that is mobilizing all of Quebec and after only one year, great benefits have been seen in our regions on many economic, social and environmental levels. The Maritime Strategy, invites all Quebecers to take advantage of opportunities offered by the wealth of our vast maritime territory, “said Minister Jean D’Amour. “It is also important that we help our local leaders in the maritime industry by highlighting their expertise, and by doing so, the Maritime Strategy will be able to reach its full potential,” said the Minister.

The management of new and existing infrastructure has become increasingly important since the aging and deterioration of physical infrastructure will inevitably reduce its intended functionality. This exposes infrastructure owners to financial risks as well as potential risks associated with their functionality and safety. The implementation of the Maritime Strategy must therefore be based on timely and reliable data of the condition of structures already in place. However, this data is often incomplete, or inexistent. In this context, it is critical that the assessment of the current condition of structures be performed correctly in order to accurately predict their future performance and anticipate the actual costs of long-term maintenance and repairs.

With its unique expertise in the durability of concrete infrastructure, SIMCO is actively involved in the Quebec government’s initiative to develop the maritime strategy.

SIMCO helps owners and managers adequately assess the condition of their infrastructure, prioritize interventions and optimize infrastructure management. SIMCO’s expertise is based on its very own advanced methodologies and technologies as well as its extensive experience within many different projects realized in Canada, the United States, and Europe. SIMCO has worked on projects for the City of Quebec, the Port of Quebec, the Port of Montreal, the Quebec Ministry of Transportation and Real Estate Investment Trust, Cominar, for the inspection and repair of their existing structures. In Addition, SIMCO’s STADIUM methodology and technology are specified by the United States Department of Defense, The Jacques Cartier and Champlain Bridges, the Port of Rotterdam, the New Jersey Turnpike Authority and the Panama Canal Port Authority.

“The expertise we have gained while working with various port authorities and departments of transportation during the construction and maintenance of their maritime structures, leads us to conclude that the success of the Quebec maritime strategy can only be achieved through the rehabilitation of our infrastructure and the effective management of our assets. In the particular context of budgetary constraints, Quebec must prioritize this rehabilitation, which will generate immediate benefits to the commercial, port and tourism strategies”, said Jacques Marchand, CEO of SIMCO.